The Words: 5686 written today, all on my Neo again. I wrote about 2000 words before I went to bed last night, and then got the rest with sprints throughout the day, both with my region’s Slack group and with NaNoWordSprints. (It helped that I had today off.)

The Story: A character almost got mauled to death by a bear today, completely unexpectedly (even by me). It was a pretty exciting start to the day’s writing. Also, Falin has become a bit less snarky and even opened up to Lorrin about his own past in the army that led him to resent the military. This revelation led to a vulnerable moment between Lorrin and Falin, but Lorrin won’t have a chance to pursue this potential relationship.

The king has arrived at the base she was recently living at and has asked to see her. He’s informed her that he is promoting her and sending her to the front lines to fight under the most renowned general in the army. Though she is honored, she suspects that he is only doing this because of the recent drama on the base. He assures her that he was already planning this before he found out anything happened. 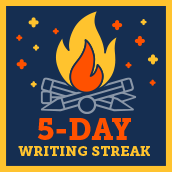 Don’t forget to check out today’s NaNoToons if you haven’t already: 2018 – November 5th