The Words: 2441 written today.  Most of it was in the afternoon, and the rest came in the evening. Mostly with another word crawl. I don’t know what’s been going on this year, but the Skype group my region formed last year, which had word wars going on nearly every evening, has been dead this year. There was some activity near the beginning of the month, mostly from new people. But not many word wars. I’m a little worried that some of the more active people made their own Skype group somewhere else and do word wars there. Maybe that makes me paranoid, but seriously…what happened to everyone? I’ve found my own ways to stay motivated and keep writing, but I’m not feeling quite as connected as I did last year.

The Story: The stand-off has escalated as the woman who was threatening Darcy’s dad with a hot piece of metal has a gun (literally out of nowhere, because the metal just wasn’t threatening enough for the scene to work). And now she has a hostage. But all hope is not lost, as another person has arrived on the scene and is trying to explain to her what he thinks is really going on around here.

Today was the point when I realized that my story simply cannot work the way I’ve written it. Not because of the lack of humor and the light-hearted take on the story I’d originally planned, but because the actual mystery and logic doesn’t work out very well at all. I will finish the story because I’m close to the end, and why not? But I don’t plan to revise it. If anything, I may considering reworking the elements that went into the motives and such, and rewrite the story from scratch. But that would be a project for another day, as I still have a lot of other novels to work on. 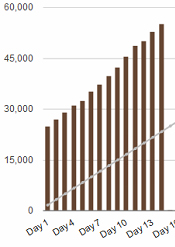 Don’t forget to check out today’s NaNoToons if you haven’t already: 2015 – November 14th

Let’s end week 2 on a high note, with more NaNoMusical!

With the close of week 2, how is everyone doing out there? Did you survive the week 2 blues? Are you finding a new drive? Just remember, write whatever comes to mind; worry about if it works for your story or not, or if it’s any good or not, later (or never)!