The Words: 3455 words written today. I was distracted for the first hour of my writing time, and I had to really buckle down with sprints to get the words in before midnight. Tomorrow’s Thanksgiving and I’ll be gone until probably after midnight. I’ll write in a notebook when I can, but I’ve made sure to have a lead pretty much for this very reason.

The Story: Missy went to talk to Jonathan’s wife Larxis about the things she’d said to the investigators. She mostly got told off by Lark, who said they were never friends, only pushed together because of their shared interest in Lark’s husband. Missy sort of caught Lark in a logic trap, which only angered Lark further, and then she promptly quit their War Games team. It wasn’t pretty. Larxis has a temper, that’s for sure. 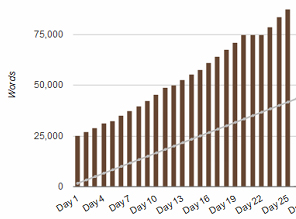 Don’t forget to check out today’s NaNoToons if you haven’t already: 2015 – November 25th