Most of that time was spent working on an item in my second list of things to revise, the same item as yesterday. While trying to add some glimpses into the personal life of my secondary main character, I had to make a small edit to my timeline. I realized that she thought of the main character as too young for something he wanted to do, but I wasn’t sure he was really young enough. I tried to change his age, but that didn’t really work out.

In dealing with this issue, I realized that the secondary main character is too young, considering that she was younger than some of the side characters in “Pithea” that she’s definitely meant to be older and more experienced than. So I aged her a bit.

Then I added in one of the scenes I wrote as writing practice a few years ago, which I think is great for the story. Tomorrow, I’ll add another scene (and probably play with the timeline a bit more). 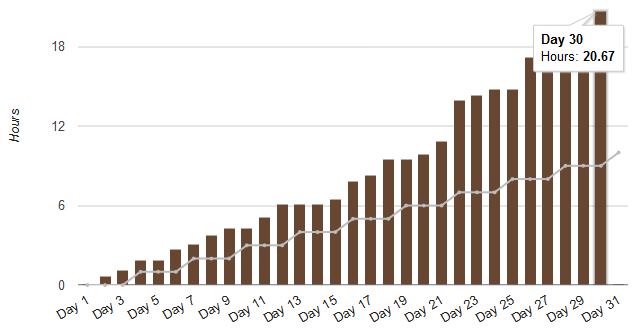 I doubled my goal of time spent working on writing this month!