The Words: 4901 written today. I actually wrote almost all of this in 2 sessions. The first was I think 15 minutes last night before I went to bed, during which I wrote 594 words. Then during the afternoon, I went on the main forums for the first time since November started. I don’t visit them much, because they’re just so crowded, it’s difficult to be heard. But I went into the Word Wars, Prompts, & Sprints forum, because my month has become all about that, and I was curious what was there. Quickly, this thread caught my eye: 3k in an hour! After reading the first post, I decided that I had to at least try that and see how I could do. When I sat down to write for the evening, I wrote a few hundred words to warm up, and then I plunged in, with Write or Die set to 1 hour and 3000 words. When the 1 hour was up, I had written 3700 words! Not sure I’ll want to do that again, but it was nice to know I could.

The Story: Lex and Leahna found what they were searching for pretty quickly into today’s session, though they’d been looking for months in the story. Then they enlisted the help of an old friend of Lex’s dad’s named Glyn. Lex shared his plan infiltrate the place they found, which impressed both Leahna and Glyn, partly because of some abilities they did not know he had, and partly because of how good of a plan it was. He’s been thinking about it for months though. They were executing the plan when I left off today, infiltrating a hidden hideout for a band of mercenaries (a small town-sized hidden hideout). 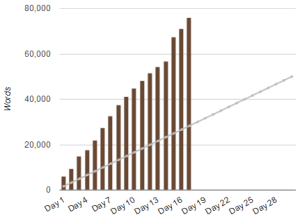