The Words: 2143 written today, all in the evening again. It wasn’t a spectacular day, but I had to write the aftermath of yesterday’s emotional, weepy scene. I’m past it now, so things should be easier tomorrow. Plus, I didn’t feel well today, so that didn’t help.

The Story: I stopped writing at the end of the sad scene, which was a mistake. I usually try to make sure I stop in the middle of a scene, paragraph, or even sentence. That way when I come back, I get right back into the flow. I didn’t even want to deal with the aftermath, but considered just moving on to the hurdle toward the end. But I did it, because I knew that I’d just have to deal with it later, and it would be better now, when I was still in the right mindset. Lex got his chance to really get scary, threatening to burn down all of the houses from that mercenary hideout, with all of the mercenaries still inside. Fortunately, he has loved ones who were able to talk him down. So now, they are waiting for the authorities in their country to investigate this band of mercenaries. Meanwhile, Glyn and Lex actually get back to the original quest, finding out what really happened to Lex’s dad. The only trouble is, that’s not really going to be wrapped up in this story. At all. In fact, the final scene coming up (which will be a long scene, set during a full-on battle out in the desert) will be the end of the story. Somehow I think this is going to be a problem for this book. 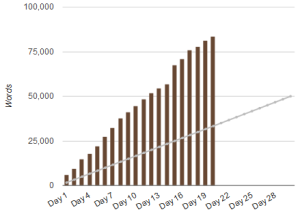