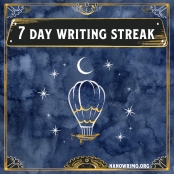 The Words: 3404 words. Today was just a terrible day. My daughter and I were at odds all day, probably the worst it’s ever been. Not only did I have no chance to get a few words done earlier in the day, by the time my evening writing time came, I was just so drained, both physically and emotionally. I took a shower to try to kind of reboot my mind, then sat down to start writing at about 10:15.

I went straight to the trusty @NaNoWordSprints on Twitter and jumped into a 25-minute sprint with 15 minutes left. After that was a 30-minute (aka #1k30), during which I wrote 1500 words (that definitely helped!). Another sprint and a little more on my own to try to hit 3333 landed me with my total for the day.

The Story:  I went back to storyline 2 today, which at first I thought was going to be a problem, given the late start to my writing. Two characters were poised on the edge of a discovery the details for which I hadn’t really thought out yet. I planned to just gloss over it and move on, but I ended up figuring it out as went along. One of the characters ended up having some insight into what she’s thought to be right and wrong for years, and we’re about to make a huge leap the next time I come back to this storyline!

Don’t forget to check out today’s NaNoToons if you haven’t already:
November 7, 2019
And in case you need some extra inspiration, check out the 2nd episode of the NaNoMusical!