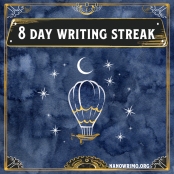 The Words: 3525 words. I did a solo sprint for 10 minutes in the afternoon, and the rest of the words came alongside @NaNoWordSprints on Twitter in the evening. I came on during a shift change, so the feed was quiet for 30 minutes (happens a lot to me lately), but rather than just write while I waited, I decided to read. (I’m close to the end of a book, so just kept wanting to get back to it.) Two 30-minute sprints later, I had my words for the day.

The Story:  Today was spent on storyline 1. After the main characters squeezed help out of a guy that couldn’t really do what they were hoping, we switched to a very familiar character, who has just come face to face with a man who used to torment her. What fun (for me, not her)!

Don’t forget to check out today’s NaNoToons if you haven’t already:
November 8, 2019

The Martian
by Andy Weir 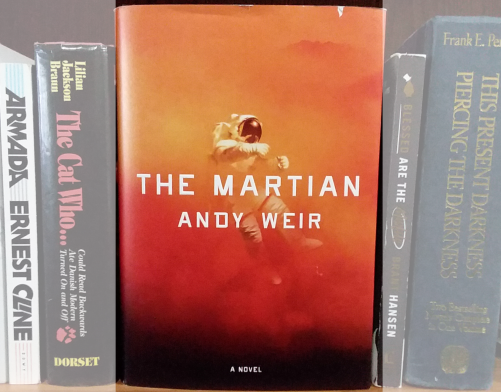 Following a dust storm that forced an evacuation from the surface of Mars, astronaut Mark Whatney is left behind, presumed dead. But he’s very much alive, and must now figure out how to survive alone on Mars while back on Earth, they work on how to bring him home.

I watched this movie a few years ago (as research for a mini escape room I helped build), and I really liked it. The book is even better! Whatney is resourceful and determined. The repertoire between him and the rest of his team is fun and touching. The determination of those back on Earth to do whatever they can to help him survive is really interesting too.

The book has a lot of explanation about the different sides of what Whatney needs to survive. Ideas are thrown out and dismissed for better ones. It has such a real feel to it, as if it were any other modern space mission that went wrong. The genre is sci-fi, and it’s obviously a bit in the future, but the science isn’t far out there. It’s just a bit past what we have now.

The format of the book was interesting. Much of the narration comes from journal entries by Whatney, so it basically reads like 1st person. Then there is the 3rd person narration of what happens back on Earth. There are other formats, but explaining that would be a bit spoilery. I enjoyed feeling like Whatney was sharing his experience directly with us.

I watched the movie again a few days after finishing the book. I still think the movie is good, but like with many adaptations, they weren’t able to reach the depth of characterization that the book did. Plus, some harrowing moments and difficulties that Whatney faced were completely written out for the movie. Still, a good movie, and a great book!

Find out more about The Martian