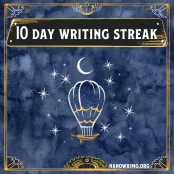 The Words: 4580 words. After a rough week of sickness and work, today was a lazy Sunday for my family. So I was given free rein to shut myself away for a few hours in the afternoon. For the first time all month, I did my own sprints for a while. I basically alternated between reading a chapter of the book I’m currently reading (Anne of Green Gables) and writing with a timer set to 15 minutes. After a few sessions of that, I had about 2500 words, and it was time to stop for a while.

Then in the evening, I participated in some sprints in my region’s Discord channel and that got me to the total for the day.

The Story: Today was the first truly frustrating day of writing I’ve had this month. I realized last night that when writing storyline 2b, I completely forgot about something that should have happened to the main character in that storyline, that would have seriously crippled him in a way that I had not been writing at all.

Originally, I planned to just write a note to remember to fix what I’d written of that storyline during editing. But I realized that the scene would really have gone differently enough that I didn’t want to just pick up from where it was. So I basically started again from the beginning of that scene. I liked how the new one went better anyway, up until the point where I started to just repeat what I’d written before. So I made notes to just splice in what was there before (with some edits to be made in the future to reflect the major change), then jumped back to where I’d been in that storyline before yesterday.

I did not delete any of what I’d written before, because it still counts for my NaNo word count. But while it’s fine for word count, rewriting is not super helpful in my goal to have a finished draft by the end of the month. I just did the math, though, and I’m about 40% through my outline, and we’re only 30% through the month, so I’m not worried yet!

Don’t forget to check out today’s NaNoToons if you haven’t already:
November 10, 2019