I read 11 books last month, which is a tie for the most books I’ve read in a month since I started reading regularly back in July. The other time I read that many was August, so before homeschool started back up. I honestly don’t know how I did it this month. Well, maybe I do. I’ve been staying up way too late a lot lately. Thanks to Goodreads tracking my books per month & pages per month, I can see that I read over 400 pages more this last month than I did back in August. That has a lot to do with reading the longest Harry Potter book in March…stupid bulky book… Overall, I’m pretty impressed by my reading volume last month.

Here are the books I read in March: 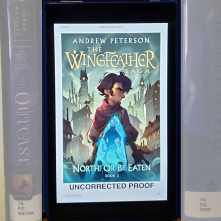 This list includes 2 ARCs and 1 re-read. My favorite book from March was North! or Be Eaten (by a slim margin). I finished 0 series, continued 4 series, and started 2 series. My ever-changing short list of to-be-reads, as well as a flag for the book I’m currently reading and an ongoing list of those I’ve read and posted about can be found here.

When a bad report card leads to Jack spending Christmas vacation cleaning out the attic, the last thing he expected to find was a map and letters that magically whisked him away to another place and time. Suddenly he’s seeing events through the eyes of Niko, a young man who lives in a time when the Faithful are persecuted and even publicly executed in an annual celebration. Niko miraculously escapes this execution and then joins a group of rebels who are determined to expose the evils of the State.

I really didn’t know what to expect when I started reading this novella and found that I quite enjoyed it. By the time Jack had visited the other world twice, I was hooked and really wanted to know what would happen. I can’t say the characters were all that engaging, but to be honest, I didn’t really notice while I was reading it. It was a quick, enjoyable read.

By comparison, the “real world” became a bit dull and monotonous. Jack’s plight to clean out the attic was only made slightly more interesting by his inventiveness as he tried to get through it more quickly. But even that didn’t bother me too much, so it must have been less dull than reading about cleaning an attic sounds like it would be. I think the shorter length of the story might have helped with that.

On the other hand, the story in the other world became a bit rushed and muddled in the last quarter or so, so I think in that area, more pages would have helped. It lost a bit of its excitement for me because of this. And the ending was a little confusing.

I’ll just say a few things about the style and editing, which I don’t generally let affect my rating with a self-published book. I’m not saying that there is no burden of responsibility here, but it’s harder for self-published authors. There were some grammar issues, but for me, this area really came down to narration and tense. The first chapter reads like standard fiction–3rd person, past tense, seemingly limited to Jack. Then at the end, it becomes more omniscient, conversational. This crops up again one other place, but I think it would have been better if it had been more consistent. And in the other world, the writing is 1st person and present tense. But at some point in the second half of the book, I began to notice areas where it slipped into past tense. All of these things, and some of what I mentioned above, tell me that the book could have used a bit more editing.

None of that detracted enough from the book for me to not enjoy it overall, though. It was a real adventure and a cautionary tale. My guess is that the “Faithful” are meant to be Christians, but to be honest, the Christianity in the book is incredibly light. You could almost insert any real or fictional religion. And one more thing–before Jack even went to the other world for the first time, I noticed a couple of references to Calvin & Hobbes, in that Jack’s little brother’s name was Calvin, and there was a girl Jack’s age named Susie that was only really in the story to be the Susie Derkins of this book. I made a note to watch out for any hint of a tiger, to verify that it wasn’t a coincidence, and then it turned out there was a character later named Hobbes! (I thought it was great, by the way.) I would recommend this for fans of Christian fantasy & adventure books.

Find out more about The Treasure Map