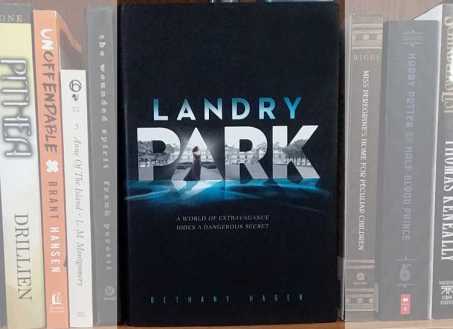 Two hundred years in the future, various factors have left most of the United States in a dystopian state that is reminiscent of Victorian times–right down to the fancy dresses and the imperative for wealthy young women to marry eligible, and wealthy, bachelors. Madeline Landry is sole heir to the Landry estate and fortune, but unhappy with her lot in life. What starts as an attempt to have some control over her life turns into a growing desire to see the lower income classes treated better, even as her father tries to head off a rebellion by the lowest caste. Meanwhile, a new bachelor comes to town and turns every head, including Madeline’s, which distracts her from everything else…sometimes.

In a rare twist for me, I enjoyed this book more than many other reviewers. Some of what I noticed complained about most in other reviews didn’t really bother me, for which I am thankful. Though there was plenty that brought the book down for me, the main character included, I found myself caught up in the mysteries presented and really wanting to know what on earth was going on, and what would happen.

Madeline is a fairly shallow character. And I don’t mean her personality is shallow, I mean there’s not a lot of depth given to her character. It doesn’t really bother me that she seemed to want to help the Rootless, while living her opulent life and struggling to actually act on behalf of the eternally dying lowest of society. It might seem like a huge character flaw that many of us would say we’d never do, but the truth is that it’s actually very human.

I should have put more emphasis on the romance in my synopsis, because make no mistake, it was a huge part of the story. With everything going on, the fact that Madeline’s thoughts are so wrapped up in what’s going on with David Dana, who is so incredibly hot and cold, often feel like they get in the way. However, even that developing non-relationship is part of the mystery of the book. In the end, after thinking that an assault that occurred near the beginning was the driving plot, I think this very relationship felt more like the story goal by the end. Whether that was on purpose or not, I can’t say. Besides the over-prominence of the romance, though, it irked me so much for reasons I won’t get into to avoid spoilers. It worked out like I expected, but was still really unpleasant along the way.

There were a few reveals near the end that I really didn’t see coming, even though the clues were there. The book turned out to be a bit deeper than it seems upon first glance. There were also a few things left unexplained that really niggled at me. I’m not saying that’s a fault on the author’s part, because in this type of series, having a few lingering questions makes sense. I can only hope they’re revealed in the sequel.

Overall, I’m glad I read this book. I picked it up without any knowledge of it whatsoever at a bargain store months ago, and almost let its low rating on Goodreads keep me from reading it. Instead of disliking it like I was worried I would, I’m looking forward to see what the sequel holds. It has a good chance of having a lot less of the things that I disliked the most about this book. I think fans of romance and dystopian worlds, especially those who also like books set in the Victorian era, or other similar-ish eras of that time.

Find out more about Landry Park