The Dandelion Killer
by Wanda Luttrell 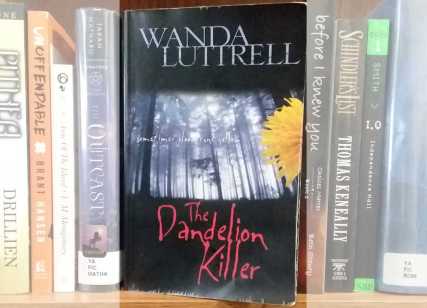 When a town socialite is murdered and a 55-year-old mentally handicapped man is found with her dandelion pin, the police take him in for questioning, only for him to escape their grasp. It’s up to his best friend and sister-in-law of the victim, Elayna Evans, to try to prove his innocence before the police re-capture him. She has problems of her own, though, as someone seems to think the victim left something with Elayna before she died. Maybe she’d be wise to stay away from the investigation, but Elayna can’t leave her friend’s fate in the hands of the police…or the real killer.

I enjoyed this book overall. I think my favorite thing was the characterization of Jayboy, the mentally handicapped man. The mystery took some interesting turns, though there was a good deal of predictability in it too. I liked the added pressure of the rising river that threatened to flood the town.

The chapters generally alternated between Elayna’s POV and Jayboy’s POV (always 3rd-person though). Watching Jayboy’s progression through being suspected of murder, then escaping, and then where he goes from there, which I won’t say, was one of the more engaging things about the book. The repetition that I noticed in the author’s style was was prevalent throughout these parts too, but seemed a lot more natural.

Elayna herself was all right as a main character, but she began to grate on me a little. For one thing, there was the repetition I mentioned, which came out a lot in her thoughts about the murder and about her absentee husband (who had taken off one day and was gone for 10 years, but she refused to move on). She also was a bit too wishy-washy for my taste.

There’s a character introduced part way through the book who was another favorite of mine. His story has a unique angle to it, if not a little awkward and coincidental. He’s the main place that the Christianity comes into this book, though to be honest, I don’t know why he had to be a pastor. It seems pretty common in these kinds of books, but it’s not like everyone who has a strong faith has to be a pastor. I did find it weird that his full name was pretty much always used, both in narration and in dialog.

As for the mystery itself, I don’t want to be too specific about the ways that it was predictable, because that would give away a lot of the ending from early on. But it was almost like the author tried to make it less predictable by setting up the narration in a way that we get used to, and then changing it on us without us realizing it. However, I don’t know if that was intentional, or just something I read into it. And there’s a New Age angle that feels so against the tone of the book, and I think it’s mostly there as a vehicle for the Christianity.

One of my favorite things about the book was this one scene in a restaurant that was newly opened by the pastor mentioned above, where there was a guy singing a song that was described but not named. From the description, I knew the song was “The Touch of the Master’s Hand” by Wayne Watson, which is a favorite of mine. So that was pretty cool. Overall, I’m glad I read it (though it wasn’t the first time–I was given this book by a sibling and read it a few times after I got it, but that was at least 15 years ago), and would recommend it to people who enjoy Christian mystery books.

Find out more about The Dandelion Killer