Finished Reading: A Plain and Simple Christmas
by Amy Clipston 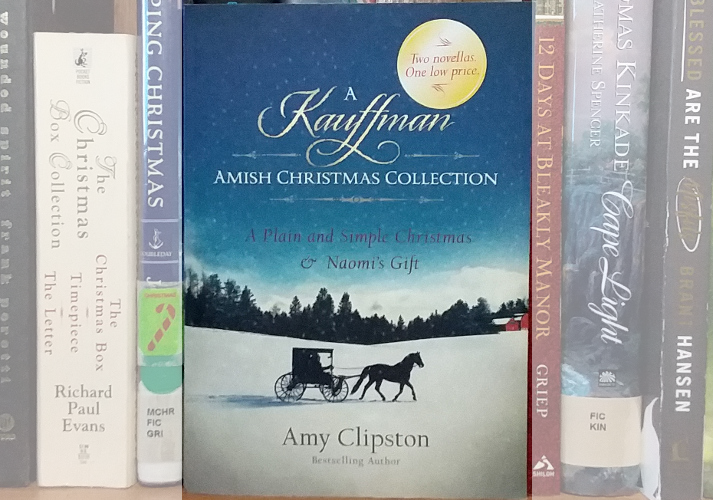 Anna Mae has been out of the Amish community for 3 years, shunned by her family for marrying an “Englisher” (non-Amish). Expecting her first child at Christmas time, she reaches out to her sister-in-law Kathryn in the hopes that she might be able to return home for Christmas. Though it won’t be easy, Anna Mae and Kathryn hatch a plot that ends in a way neither of them expected.

A quick read, this novella left me with a lot of problems. I didn’t care for most of the characters, felt that very little happened overall, and found the plot to be all too predictable.

I’ll start with that last one first, because the synopsis for this book literally says that this story is “an inspiring page-turner that will keep you guessing what happens next…right to the very last page.” That is a tall order for any story, be it book, movie, or television show. Christmas stories especially tend to be a bit more predictable, generally speaking, because we expect them to end on a good note. And this book in particular…well, I can’t really think of anything that happened that I couldn’t predict. Maybe one thing:

Though Anna Mae is the one wishing for a family Christmas, I’d say Kathryn really becomes the main character, as she was Anna Mae’s contact in the Amish community, and her partner-in-crime, so to speak. Not that there was anything criminal about it. And in fact, I have to go on a tangent here and explain that I know little to nothing about Amish ways, but this book eventually explained that those who are shunned were, indeed, allowed to visit, but simply had to stay apart from the others during meals and church services. Yet Anna Mae’s dad, bishop of the community, treated her as if shunning meant she didn’t exist at all. It was harsh and yet explained and dissolved all too easily.

Now back to Kathryn…she grated on my nerves. For one thing, the narration tells us that she’s not a proud person, but we sure do see a lot of her thinking how Anna Mae’s family will have her to thank for their reunion. Plus, her husband–Anna Mae’s brother–insists that she not bring Anna Mae there for Christmas for various legitimate reasons, but she does it anyway, betraying his trust and involving other family members, including her own daughter. For a Christian family, and moreso, one where it’s clear the man is usually the head of the household, it really bugged me that in the end, she was seen to be right, and there were no real consequences to their relationship. I also disliked Anna Mae’s father and strongly disagreed with some of his beliefs and traditions.

And finally, what made this short novel really drag on for me was that everything that happened in the book was basically repeated. By this I mean that we’d see something happen, and then the next scene would be a character recounting what had just happened for another character. But where most of us would condense that with a line like, “She explained the events to her mother,” we see the entire conversation rehashing the event we’d just seen happen. This happened multiple times, which led me to start scanning to get through it more quickly.

I know that Amish fiction is an entire sub-genre within the genre of Christian fiction, and I’ve wondered what the appeal is for a long time. I realize that this might not have been the example to base my opinion on, but there were some things that came up that weren’t part of what I didn’t like about this particular book that lead me to think it won’t be my cup of tea as a whole. I don’t really think I could recommend this book to readers of Amish fiction either though. It just didn’t have much substance.

Find out more about A Plain and Simple Christmas