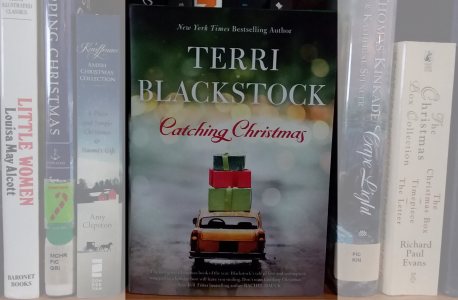 Cab driver Finn Parrish picks up 80-year old Callie Beecher to take her to a doctor appointment. Callie is barely aware of what is happening, which leads Finn to be concerned about her and find out that the appointment was made by Callie’s granddaughter Sydney. A first-year law associate, Sydney is struggling to keep her job when the company is going through downsizing, and she has been saddled with a case that goes against her own ethics. As her grandmother’s health goes downhill, Sydney is stuck at work, and Finn is stuck helping Callie find a Christmas date for Sydney. As Christmas approaches, secrets are revealed and lives are changed.

Continuing my seasonal reading, I was looking forward to a feel-good Christmas romance, even welcoming some sap and cheesiness. What I got was a sad story with an emotionless romance and flat characters.

The book goes back and forth between Finn’s and Sydney’s 1st-person points of view, which I still don’t really get, but realize might just be Terri Blackstock’s style (the other book of hers that I read was like this too). Fortunately, most of the time it was from Finn’s POV, because at least him I could stand. His characterization was weak, as the type of person I thought he was supposed to be didn’t jive with how he talked and acted in the 2nd half of the book. But Sydney barely had any characterization. She was a weak female stereotype, despite stating once near the end that she wasn’t the weak type. But she let everyone walk all over her, and everything happened to her. She didn’t do much of anything herself.

Callie would have been my favorite character, as a cheerful, friendly woman who believed so strongly in God and Heaven that her only regret about dying some day was that her granddaughter would be alone. Except that she tended to say really mean things about other people, things that were laughed off because she’s just an old lady with no filter (fat shaming, for example). On a positive note, I would love to pass on the kind of legacy that Callie strives to, pointing others to the God that I serve even in casual interactions.

I don’t read pure romance novels all that often because, though I love a good romance, I prefer subtle, slow builds, and of course in a romance novel, the genre itself tells you that the male and female MCs are going to end up together. I’m okay with that to a point, but that makes it too easy for the author to get lazy. So yes, it’s clear that Finn and Sydney are destined to end up together, but at least make it make sense! They barely had any interaction in the first half of the book, and the romance that developed between them made no sense and was flatly written.

Between the cute cover, the promise of a “feel-good Christmas book,” and the other Blackstock book I read being pretty good, I was excited about this one. Unfortunately, I feel like I wasted some of my limited Christmas reading time on this book. Thankfully, it was short. I wouldn’t really recommend this book to others, but if you don’t have a problem with the issues I mentioned above and are looking for a Christian romance, you may want to give it a try.

Find out more about Catching Christmas