The End of the Magi
by Patrick W. Carr

Myrad is the adopted son of a Hebrew magi in ancient Persia. After having a dream of a star in the sky that didn’t move throughout the night, Myrad is brought into the order of the magi, just in time for a massacre. Barely escaping, Myrad now must outrun his pursuers while also attempting to discover the meaning of his dreams about the star and the prophecy of the Hebrews Messiah that his father taught him about.

With Christmas looming, I loved the idea of reading a book about the advent of Christ from the perspective of the magi that visited Him not long after his birth. This book really hit the spot, easing me into the season. With great characters and some fun relationships, following the star with Myrad was an adventure that highlighted some important Biblical truths.

Myrad himself is a decent protagonist, young and inexperienced, learning everything around him along with us. He has a clubfoot, which gets in his way quite often. Walagash is now one of my favorite characters ever. And the relationships between Myrad and Walagash, Roshan, and Aban are enjoyable to watch develop along the way.

One of the main reasons for 4 stars, instead of 5, is that there was a lot of politics in the book, which is the main thing that caused the story to drag in parts. It does make sense, given the state of the empires in that region at the time. But it wasn’t terribly interesting to read the characters discussing it.

(Warning: the following paragraph contains spoilers.) What I loved most about the book, though, was that it went past the birth of Christ to the real root of Christianity–His death and resurrection. We see the rift form between those Hebrews who believe that Jesus is the Messiah and those who don’t, because he didn’t conquer the Romans like they thought he should (or because he died and they left before his resurrection). And when the magi who stayed in Jerusalem even after the resurrection because they felt there was more for them there got exactly what they were looking for, they left changed.

For me in particular, the book really drove home the importance of trusting that God’s way is the best way, even when we can’t see what He’s doing. It’s a reminder that He can and does use anyone He chooses for his plans, even those people who think that they are worthless–even those people who don’t follow Him. We can only do our part and accept His will in our lives, and in this, we can have peace in stressful times. This has been really important for me lately.

While this book could easily be pigeon-holed as a Christmas book, it is so much more than that. I recommend it for all fans of Biblical fiction. In truth, I think it should be read by anyone who enjoys historical fiction or quest-driven stories, because the message contained within is important and should be heard by everyone.

Thank you to Netgalley and Bethany House for providing me a copy of this book to review.

Find out more about The End of the Magi

The optional question for this month’s Insecure Writer’s Support Group post is quite timely for me, and very close to the topic I was considering writing this post about anyway. Here is the question posed for today’s IWSG post:
Let’s play a game. How would you describe your future writer self, your life and what it looks and feels like if you were living the dream?

With the impending release of my first full-length novel, I have started to dip my toe into marketing. I am the absolute worst person to be self-publishing, as I have 0 social skills and don’t know how to carry a normal conversation even in everyday life. Add to that a very small budget and every common writer insecurity, and well, all I can do is the best that I can.

Last Saturday, I took part in a Local Author Book Sale at the library in a nearby city. It was part of a holiday shopping extravaganza downtown. To participate, you basically have to have a book you can sell, so I qualified with The Triangle. I took some copies to sell and some items with which to promote my future novel Pithea in advance of its release.

I did hand out some promotional bookmarks and talk to some people who showed interest. But I think the biggest thing I got out of this event is an understanding of what to do better/differently next time.

There was a man at the table next to me, younger than me, who had something like 6 books to sell (mostly novella-length from the look of them). When he arrived and started setting up, he lamented how many things he had forgotten to bring (we loaned him our masking tape). He said he used to do events like this all the time, but has gotten busy with school recently and didn’t take much time to prepare for this.

With him as an example, as well as other authors I met or studied during the event, I commented to my husband that someday I’d like to be as confident as he was with the people walking by his table (though I’ll never be the talker he is), but that I’d never want to get to the point where going to an event like this is so run-of-the-mill or unimportant that I don’t still do my best to prepare for it and make it a great event. 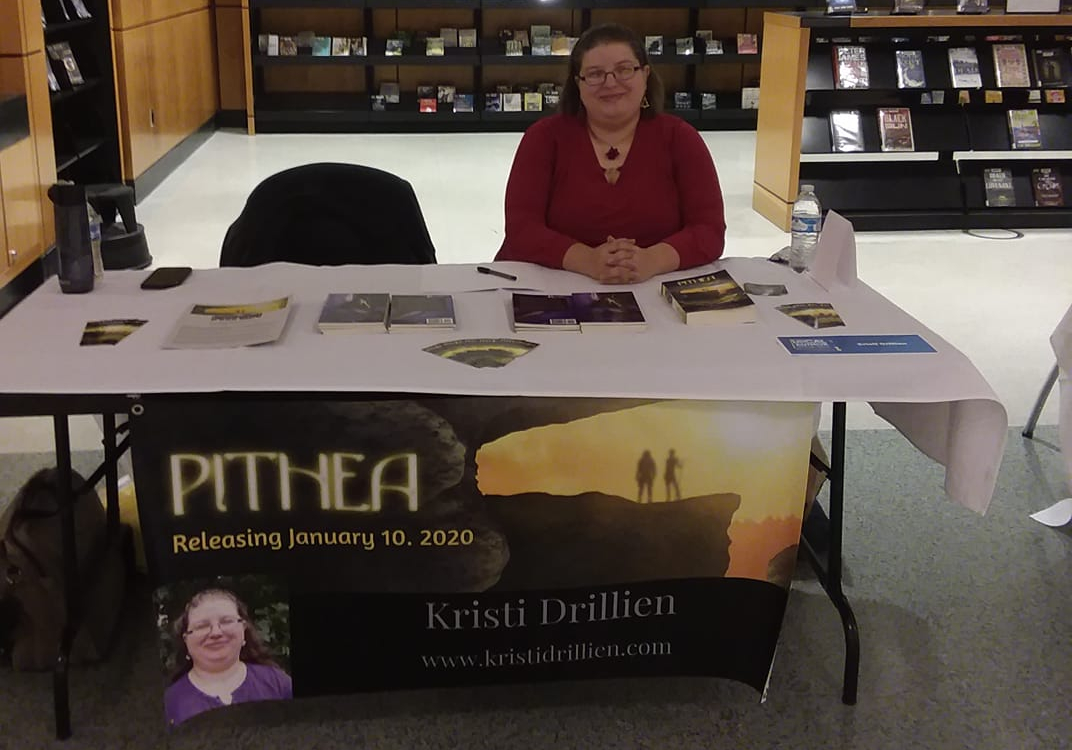 That’s me at my table with my pitifully meager display compared to most of the others. My husband insisted on the banner, which was a splurge for our tiny budget, but was well-received. I was dealing with imposter syndrome pretty heavily the whole day, and questioning why they even let me come to this event. But I was really glad I did. It was a huge step up from the only other event like this I’ve been part of, and yet, still small enough to give someone like me a chance to attend and learn.

All of that said, I don’t want to end this post without saying that I am not as disheartened as I may sound. Everyone has to start somewhere, and I’m definitely just starting out. I may never get to the point that I’d like to, regarding confidence and self-promotion, but I do know that I’ll get better than I currently am with practice. And if along the way, I can find an audience of whatever size for my books, people who enjoy the characters and their stories and want to know what happens next as much as I do, then I’ll be pretty happy.

For my fellow writers, what does your future writer life look like?

IWSG Blog Hop, Powered by Linky Tools
Click here to enter your link and view other blogs in the IWSG…