The Curious Conspiracy on Gamma Ceti
by Nemo West 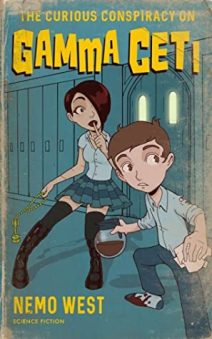 Gamma Ceti is a planet in another galaxy, with a remote colony of vaguely religious people living in a vaguely 20th century world. Dex is an outcast in his class, which essentially means he’ll be an outcast for life, because of the closed-off and tight-knit nature of this community. When a new girl arrives from Earth, he’s infatuated by her, but too timid to approach her. However, it’s not long before an encounter with a bully forces Dex onto Tabitha’s radar, and then life really changes for Dex. He and Tab spent a lot of time alone together, which she eventually admits started as an attempt on her part to try to uncover some strange happenings in the school. What neither of them ever expected was to encounter a massive conspiracy involving brainwashing, a conspiracy that those involved would kill to keep secret.

When I first decided to read this book, I expected a fun YA adventure with a mystery to unravel. There were some interesting elements to the mystery as it unfolded, and I appreciated the way that the main character had some real drawbacks, even as he started to evolve through the story. Even Tab broke some stereotypes I expected from her character.

Unfortunately, I was distracted by a few issues. One was the amount that the two main characters had frivolous conversations in the middle of dire circumstances. I’m not saying that the conversations themselves were unimportant to the characters, especially in high school. However, running away from bad guys, or trying to escape a secret lair, are not the best times to have arguments about relationships. Maybe this was a result of the author wanting to keep the action going, while also trying to resolve the relationship, but to me, it just made absolutely no sense. At one point, the characters even stopped moving toward their escape to have one of these discussions!

Another thing that bothered me about the book was the writing. Maybe it’s only because I read the entire thing over the course of a day, but I noticed such a repetition in character actions and dialog tags that it grew distracting by the end of the book.

I also have to mention the cringe-worthy items for me. First, there was the f-bomb right off the bat that made me realize the book would be just as language-heavy as the adult books I’ve been reading lately. Then there was the rather graphic sex scene with two teenagers that was very unwelcome and uncomfortable for me. That blind-sided me in particular, considering the YA/Teen shelving and the cartoonish cover art (though I didn’t notice the blood on Dex’s sock until after I’d read the book). I would not want my teens reading this book.

By about halfway through the book, the characters had hinted at what was going on, and it never really deviated from that. I expected some sort of twist, or final reveal, but outside of a few small unexpected things, it followed through to the end much like I expected. And there was no real resolution, not even a firm answer about whether what the characters hinted at is what was even going on. It looks to be the beginning of a series, but I don’t know which thread the continuation will follow, so for now, I just feel let down. In some ways, this is what you want from a book in a series, and to be honest, it did its job. I will look for the next book in this series and give it another chance, going into it this time with an understanding of what I’m in for. That’s the main reason I am giving this book 2.5 stars, when originally I planned to give it 2.

Final thoughts: The book is a strange mixture of being too mature for teen/YA (in my personal opinion), but too juvenile for anything above that. I honestly couldn’t recommend this book for teenagers, but for people who enjoy sci-fi that is less complex and tech-heavy, it could be worth a read.

Thank you to Netgalley for providing me an ARC of this book.
Publication date: Aug 20, 2019

Find out more about The Curious Conspiracy on Gamma Ceti