My primary goal this week was to brainstorm new scenes to add to “Outcast,” book #2 in my series, based on early feedback. There are 2 main areas of the story that I’m going to add more to in some way, and one of those areas is one I’ve focused on in freewriting a lot over the last few years. So I have several scenes in mind that would work well in this story, with some revision.

While searching for some of these scenes, past-me reached out and slapped present-me in the face. I do my best to keep my writing practice all in one place. I may write it in various different notebooks at first, but I try to make sure I type everything into the computer and keep it all in sub-folders of one main folder. But apparently I still fail at this sometimes. So I went looking through some of my notebooks for one scene I remembered writing (it wasn’t easy, because I have so many currently active ones, any one of which I may decide at the time is the best place for writing practice). When I found it, I also found something else…something revolutionary.

Apparently back in September, during the early part of the current draft of “Outcast,” knowing that I needed more words, I used my Writer Emergency Pack to try to generate some new ideas. I wrote ideas using two different cards, but had forgotten all about them. When I recently found what I’d written 5 months ago, I got really excited. The truth is, most of what I wrote wouldn’t generate a lot more words, but I already have enough new scenes in mind for that. I think. But these were some ideas that would strengthen certain parts of the story, and the series as a whole!

So with some new ideas, I knew that what was coming next was not going to be easy. I had to figure out how to fit all this new stuff in to an existing draft.  I had a really rough time wrapping my brain around how best to do that, and kept getting to my evening writing time late. So I put it off. I did very little for my writing for most of the week. Not nothing, just very little, and not what needed to be done.

So today, when some plans fell through, I found myself with a few hours of free time this afternoon/evening. And I decided that the best way to proceed was to break the story down to its basic parts (scenes) and just dig into it. And though normally I am able to do something like that on Scrivener, it just didn’t seem helpful today. So I made a spreadsheet with scene headers and printed them out, cut them apart, color-coded them based on the story arc they were for, and wrote out new ideas on other pieces of paper. And I spread them out over the table and moved them around until they made some sense. 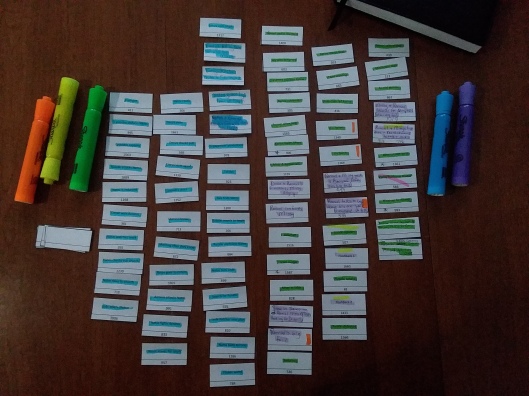 I also remembered how much easier it can be to sort out the scenes in this story when I group them more by story arc, so that’s how I did it. I can’t really decide on the new order of scenes until the new scenes are written anyway, so this is good for now. I now have a new outline. After updating my Scrivener file for this story to reflect what I did with the papers, it’s going to be time to start writing new scenes (yay!!).

While I work on continuing the series, if you’re interested in reading where it all starts, Pithea is available on Amazon as both an e-book and paperback (it’s also on Kindle Unlimited).