Finished Reading: This Light Between Us
by Andrew Fukuda 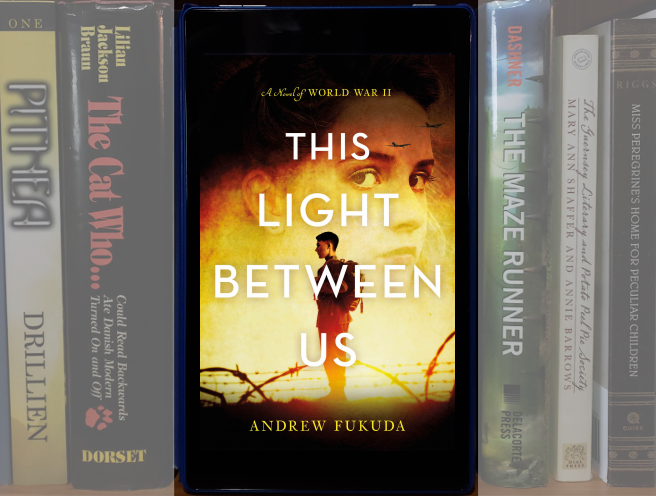 As a Japanese American during WWII, teenage Alex Maki’s life begins to deteriorate until his family is sent to a detainment camp. Up to and during this time, he is pen pals with a Jewish girl in France, who is seeing the growing persecution of Jews around her. This friendship is his one bright spot in an otherwise scary, unpleasant time. They share their hopes, dreams, fears, and ideas about acceptance vs. revolt through their many letters back and forth. As the war rages on, both of their lives change in ways they can’t imagine, and their strong friendship might not be enough to keep hope alive.

This book was incredible in some ways, and problematic in others. I really liked the history that was presented in this book, as well as the relationships. However, I had a difficult time with the style of writing and with the pacing.

I’ll start with what I liked, which is plenty. I loved the juxtaposition of the two teenage pen pals, who most readers will understand going in are being set up for intensely difficult times ahead. While I have seen and read many books about the Jewish side of this, the Japanese American side was a fresh topic for me. It’s easy to see the Nazis as evil because of what they did, but it’s also easy to forget that America put their own citizens into camps (though not heinous as the Nazi camps, as is clearly recognized in this book).

There was a pivotal scene not far from the end that I was curious enough about to look up and found that it was historically accurate, which was really neat to me. And the author’s notes at the end said it was one of 2 sources of inspiration for this book! Overall, I appreciated the history in this book.

I think my favorite parts of the book were the letters between Alex and his pen pal Charley. I would have been okay if more of the story had been told through those letters. I also liked the way a few other relationships developed throughout the story, particularly those between Alex and his brother Frank, and Alex and Mutt. Thinking of these, though, make me realize how light the book is on deep characters. Overall, those 4 are the only characters with any real depth, and none of them are particularly deep, besides maybe Alex and his brother.

This might be largely related to one of my biggest dislikes with the book. The story, which is presented as a personal narrative, has some strange inconsistencies in writing style. It fluctuates often between 3rd person limited and 3rd person omniscient (especially in the last third), which can at times make me feel like I have mental whiplash. Some of these sections easily could have been shown from the limited POV of Alex, rather than the broad POV of everyone involved. The story is also written in present tense, which, to me, is a strange choice for the omniscient POV. This caused the book to not flow as well as it could have.

Similarly, during the omniscient sections, there’s a lot of telling, instead of showing. I’m really not a big stickler for the “show, don’t tell” adage, but even I have my limits. I also would have preferred some translation for the French in some parts. This is a small gripe, because it didn’t come up often, and most of the time I could guess what was being said from context. But during a pivotal scene near the end, I had to use Google to translate some phrases to make sure I knew what was being said, and I’d rather not have to leave the book in a moment like that. (There was also something said in German that the reader is led to believe was some kind of German curse, and it’s not translated or even hinted at otherwise. I know enough German to know it was not a German curse, and was really quite emotional.)

So, overall, I did enjoy the book. It wasn’t a favorite, but I also think that most of what bothered me was more personal preference than normal. I think most people will not be bothered by the writing style, especially. It is listed as YA, but I’m not sure how much it works for that crowd. Though I will say that the dialog at times is pretty immature, so that might work out well (it’s also a little too modern, in my opinion, but I’m no expert). If you’re a fan of historical fiction, especially related to WWII, you will probably like it.

Thank you to Netgalley and Tor Teen for providing me a copy of this book to review.

Find out more about This Light Between Us

For once, I am going to explain something new I’m doing on my blog succinctly. I hope. Let’s see.

Since self-publishing a few books myself, I’ve been more aware of books that others have published themselves. I have also discovered a desire to read more self-published books, to support other authors who have gone this route like myself. It’s not easy out there for us.

Of course, it’s not that easy to find self-published book. There may be a database for it somewhere, but I haven’t discovered it. And even if I did, just like with traditionally published books, I am going to prefer to read certain genres, and if at all possible, avoid books that just won’t be a good fit for me for some reason.

I currently have 3 books on my TBR that I know were self-published, and 1 that I read recently. And in doing a little digging for this post, I realized that a series I’m currently in the middle of was most likely self-published. (Books that are published under an imprint created by the author are also self-published, but can be trickier to spot.) My plan is to make special posts about these books after I’ve read and reviewed them to highlight the book and the author.

Now and then, I will also post something I’ve learned about self-publishing, or a suggestion, trick, etc. I’ve picked up. Goodness knows I am not an expert, and am especially weak in one key area–marketing. But I also know that some people don’t even get to the point of needing marketing, or assume they’ll have to shell out a lot of money for every step along the way. In some small way, maybe my experience on this road will be able to help someone else. This will not be a weekly series, but an on as-able basis. Come back next Saturday for my first post in this series (besides this introductory post).

Four (possibly 5) books/series does not make for the most effective series of posts though. If you who are reading this know of self-published books that you would recommend, please let me know! Whether you published it, your friend, relative, neighbor, or if it’s simply a self-published book you’ve read. Obviously, we may not have the same taste in genres. My most commonly read genres are Christian or non-Christian of mystery & thriller, romance, historical, young adult, and speculative fiction. I do reserve the right to decide not to read the book you recommend if I can tell the genre is very far from what I normally read, I think I’ll have an issue with some of the content, or for some other reason that I think it just won’t be a good fit.

If you have a recommendation for me, please use my Contact Me form to tell me about it.