Finished Reading: The 7 1/2 Deaths of Evelyn Hardcastle
by Stuart Turton 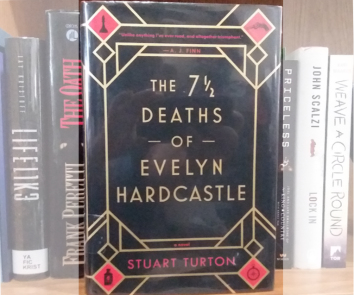 Imagine coming to consciousness in the middle of a dark forest, mid-sentence, with no memories of who you are, where you are, or why you’re in the middle of a dark forest yelling someone’s name. That is how this book begins, and it only gets more interesting from there. The main character & narrator eventually finds out that he is going to relive the same day 8 times, and that each time, someone will die (the same someone). Only if he can solve the murder will he be released from doing all of this over again, wiped of memories at the start of doing it again.

I had my ups and downs with this book, but in the end, the ups did outweigh the downs. I’ll start with what I enjoyed.

The murder-mystery itself was intricate and well-planned. It kept me guessing throughout the book, especially in the later half, when answers were finally starting to come, yet kept being not what they appeared to be. No one is ever quite who they seem to be, even the people that you are certain couldn’t possibly be hiding something. And I really appreciated the way that the narrator’s different hosts contributed their own abilities toward solving the murder.

As the same day is being relived by the narrator, it reads a lot like a time travel story, as the narrator sees the same events happen over and over. The author did a good job with the continuity in this respect. There were a few things that confused me in this area, but they were intentional (not intentionally confusing, but intentional as in not a continuity issue). I can’t say more without giving some spoilers.

I was certain throughout the book that there would never be an explanation given for the greater mystery–who or what was behind the narrator being trapped inside the various guests at Blackheath, forced to solve a murder. A combination of some reviews that I read and my own assumption that this wouldn’t be explained, due to the why not being the focus of the story, led me to this certainty. I was pleasantly surprised to find that an explanation was given, and while I was still left with some questions when the book ended, a Q&A section at the back of the book clarified things. To be clear though–this wasn’t a cheat on the author’s part to leave out some information and fill in the blanks later. It didn’t bother me to be left with the questions I had–it was the kind of thing where the reader was left to infer their own answers, and it turned out I had inferred them correctly.

Here were the downsides to the book for me (as spoiler-free as I can be), which can be mostly chalked up to personal preference:

Early on, I struggled with how long it took to get into the mystery, and what was happening that seemed to be completely unrelated, or at least very different, from what the book was going to be about. Between the title of the book and the inside of the book jacket, I knew a lot more than I feel like I was meant to know, and grew impatient waiting for that information to be presented in the book. Even the name of the narrator is right there on the book jacket, but that information wasn’t given until at least 1/4 of the way into the book. I don’t think this is the fault of the book itself though, so much as the fault of the blurb and, to a lesser degree, the title.

The book is written in 1st person and present tense. It works well for the premise, but the downside to this is that certain events are a little too up-close and personal for my taste. This mainly relates to violence and death, but other situations as well. By the end of the book, I felt like I should take a shower, as the mustiness and decay of Blackheath and the alcohol- and smoke-covered guests is described so often, and in such intimate detail that at times it felt like I was swimming in it. I also didn’t care for the extreme way that the author portrayed one of the narrator’s guest’s overweight body, with such disdain, and not to mention as if the host could barely walk 10 feet without being out of breath. I was as thankful to be out of that host as the narrator was.

The last downside I want to mention is that I didn’t personally care for the author’s style. There was so much figurative language that, by the end of the book, I actually said to my husband, “I’ve read this sentence 5 times, but I can’t tell if something big just happened, or if it’s just a metaphor.” There is also quite a bit of description, so between that and the figurative language, the narration often bogged down the story for me. I came to appreciate the dialog, because it was much more straight-forward, but a lot of the story happens in the narration. By the last third of the book, though, I had started to skim the descriptions (how many different ways can you tell me that a new room we’ve entered is dirty, run-down, and dark?), hoping I wouldn’t miss anything important along the way.

To sum up, I did enjoy the book, and once I really got into the mystery, I found myself wanting to come back to it whenever I could. I would recommend it for people who enjoy mystery, especially those with intricate plots. I think many would struggle with the complexity of it though. I would not recommend it to my friends and family, however, as I think the violence and debauchery might bother them as much as, if not more than, it did me, so keep that in mind if you don’t care for that sort of thing.

Up next: The Oath by Frank Peretti