The Oath
by Frank Peretti 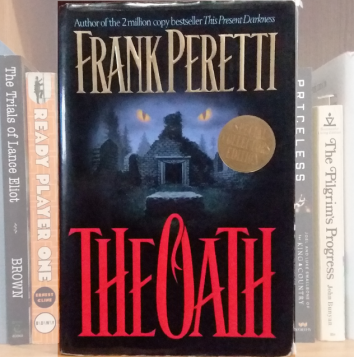 People are disappearing, possibly dying, in or around a small mining town in the Pacific northwest, and the the people in town seem to know what’s going on, but are unwilling or unable to talk about it. When an outsider dies, it opens up their small-town secrets to the rest of the world. The brother of the outsider who died starts to dig and uncovers a creature that he is determined to bring to light, but the town’s occupants won’t let go of their dragon without a fight.

The Oath has been my favorite book pretty much since I first read it, at least 20 years ago. Up until maybe 10 years ago, I re-read it just about every year. It used to scare me when I read it at night, despite how well I knew the story. Now that I’m getting back to reading regularly, I realized how much I wanted to read it again, and part of that was curiosity about whether or not its status as my favorite book would hold up. I’m happy to say it did!

I fully admit that the book could have been shorter, as there is a decent amount of description of old mining operations and mountain views that I generally skim, but overall, the book is a great example of a Christian thriller. It is also an allegory, which I think is important to realize while reading it.

Once again, by the time I was in the 2nd half of this book, I found myself caught up in the hunt and the excitement of what was happening. I did not have any issues reading at night though, so apparently I’ve either gotten used to it enough, or I’ve grown out of that problem. But I thoroughly enjoyed it, and in a way felt like I was coming home as I read this classic favorite.

Find out more about The Oath