We want YOU to join us this year!

National Novel Writing Month is an event that takes place every year during the month of November. The basic idea behind it is that participants attempt to write a 50,000-word novel (first draft) during that month. The website provides a place to record progress, inspiration throughout the month, and social interaction with other participants.

I LOVE watching that bar fill up!

I love NaNoWriMo. It’s a huge part of my life. I wrote 80% my very first finished novel draft during NaNo in 2013, and all of my second novel’s first draft during last year’s event. The focus on quantity over quality, the support and accountability, and the overall excitement of the month really spur me on.

And never underestimate the value of competition.

I believe that NaNo can be for anyone–not just those hoping to publish a novel, or make a career of writing. Not even just people who like to write as a hobby. Anyone who has ever dreamed of writing a novel (or long story, or any lengthy work…heck, even just several short stories) can benefit from NaNoWriMo.

NaNo, however, isn’t necessarily for everyone. By that, I mean that I realize that there are people who don’t work well under the pressure that NaNo can bring. Or who do write (as a hobby or otherwise) already on a regular basis and wouldn’t benefit from the intensity of the event.

I first participated in NaNoWriMo in 2007. It wasn’t as wide-spread as it is now, and I didn’t have a local region close enough to even attempt to join in local events. I loved participating, and I loved the results of my month of frenzy. Then I skipped the next year because I didn’t have any idea for something to write. After that, I proceeded to skip 2 other years–2010 and 2011. I made the excuse that having a new baby at home made it impossible to try. However, looking back, I think it was just as much that I hadn’t been randomly inspired by a story idea.

Not participating those years boils down to one reason: fear of failure. If I think I don’t have a reasonable chance of completing NaNoWriMo, I would rather not participate. However, since I spent every one of those Novembers agonizing over the fact that I wasn’t writing, and thinking, “If I start now, I may still be able to win,” I do sometimes feel like I actually participated those years, and simply lost. I lost by not trying.

Last year, as November approached, more than one family member told me they had considered or were considering participating in NaNoWriMo. Apparently my enthusiasm had finally spread! However, one of them said he didn’t know if he would, because he might not have an idea in time. Another said she was pretty sure she simply wouldn’t have time.

If someone considers participating in NaNo, but chooses not to, what is the reason for their decision? It’s most often fear of failure, as near as I can tell. Without that looming deadline, that possibility of “losing,” there wouldn’t be as much reason not to jump in and try. However, that looming deadline is exactly what makes the event so fun, exciting, and helpful to many of us.

So, as a NaNo veteran (my qualifications include 5 years of actual participation), I want to do what I can to help those who are considering NaNoWriMo this year, but don’t think they have what it takes.

NaNoWriMo is almost two months away, which is plenty of time to develop a plot and create some characters. It also gives time for a hopeful Wrimo to work out how they will find the time for NaNoWriMo. While it is one of the first things many people who are considering NaNo wonder about, it doesn’t have to be a reason not to participate.

One of the reasons NaNo works so well is that it only lasts a month. One month. 30 days out of 365, during which we tell ourselves, our families, or our friends that we’re going to disappear, slack off in our duties, or ask for extra help. It’s not always; it’s only for one month.

I’m a stay-at-home, homeschooling mom with two kids. My prime writing time is from around 9 pm until maybe 2 am. The house is quiet, and I’m a night owl anyway. Sometimes I’m able to slip away for twenty minutes here and there during the afternoon. On weekends with no plans for the family, I really go nuts, because my husband is home to take care of the kids.

The key, though, is to make NaNoWriMo a priority. Don’t schedule unnecessary events during November, give up some TV or computer time in the evening, and give NaNo the time and attention it needs.  How much time it needs will vary on the person, but I tend to believe that the more planning is done on a story, the less time the writer will take to get the words out.

One running joke among Wrimos is that our novels are built on inspiration, hard work, and caffeine.

My plan is to make more posts between now and November that could help someone plan out a NaNoNovel from scratch. I’m not a professional writer, a creative writing teacher, or even very experienced at this sort of intensive planning. I’m simply someone who wants to share the joy and creativity of NaNoWriMo with everyone.

If you’re ready to start planning your story, don’t let me hold you back. You can probably search the internet for ways to generate ideas for a novel and find help from people much more qualified than I. But if you come back next week, I’ll post some of my own suggestions for sparking ideas. As daunting as the end goal may seem, it all starts with a tiny seed.

In the meantime, start using the next two months to prepare your schedule. Figure out ways you can make more time in your day, or decide what you can cut out for a month. And use this time to practice. It doesn’t have to be as intensive as November will be, but take some free time here or there, time that might normally be spent reading, watching TV, or whatever, and work on your pre-writing during that time. Get the feel of what time of day is best for you to do writing work. And always be thinking toward November. 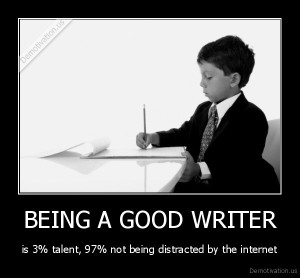 You’re on your own with this one…

9 thoughts on “Time for NaNoWriMo”