Words/Time: 30 minutes, adding revisions for “Pithea” that were made on paper into the computer. I really wanted to do more today, and maybe I still will before I go to bed. Unfortunately, it was like slogging through a lake just to get to my writing time today. And then, because of the rough, “feeling like a terrible mom because I can’t control my 5-year-old” evening, it was just as difficult trying to focus my brain on actual writing work. So since this week’s TCSTB meeting was moved to tomorrow night (it’s usually on Tues nights) and I had more revisions I hadn’t put online yet, I decided it was a good night for a more mindless task.

I always say I learn something new every year of doing NaNoWriMo–something about myself as a writer, something about writing in general, or new tips or strategies for NaNoWriMo. This year, I’m already learning, and November hasn’t even arrived.

If you’ve been following my steps for preparing a story for NaNoWriMo from scratch, you may be doing the same thing I’m doing right now–trying to pull a plot together. I’m still in the early stages of that, and to be honest, I’m not sure that what I’m working on is going to be for NaNoWriMo.

I have maybe 2/3 of a completed outline for a story I was planning to write this year. But when I posted the first list of story seeds, I started thinking about how long it’s been since I’ve started a story from scratch. There can be a lot of joy in the discovery, and that’s something I haven’t had much lately. My current writing projects are all stories I started crafting years ago. Of course they’ve changed shape along the way, and plenty of new elements have been added recently. But that’s not quite the same as starting from scratch. Also, because I have two novels already written in the aforementioned story world, and both are still in revision stages, I figured there was no need to add another story that will just sit on the shelf for years while I finish the first two.

So I decided to take my own advice and do the activities in my own story seed posts, free writing in the hopes that a new idea would spark. After a few days of doing a few of those activities during my writing time, I realized that it was difficult to use my imagination on certain pictures in which I knew what was happening or who the people were. I still did my best, but I’m not sure it was as effective as it could have been. However, because of this issue, I went such an odd direction with one of the pictures that it just may have turned into something for me.

This is the picture in question…all because I was trying not to make it about the storm that actually caused that.

But where I had hoped to come up with ideas for a story that isn’t even in the same world as my others, this one really just ended up being an idea for events that would happen 1000ish years before my other stories. I really don’t seem to be able to get away from Pithea and its world (not that I mind too much).

So back to my original point, before I lose anyone, I discovered a new tool yesterday that has come in handy during this early stage. I have all sorts of ideas that have started to flow out of me since writing about the picture above. So I decided to give Scapple a try. It’s a free-form idea mapping program made by the same people behind Scrivener. I started putting my thoughts into it, and I really liked it.

So in my last NaNo post, I said that I thought the laying out of ideas and starting to form them into something coherent was best done on paper. Now, only a few days later, I’m suggesting that people download the free trial of Scapple and try it that way. It’s not that you can’t do everything on paper that you can do in Scapple, but…well, putting notes into the computer has its advantages too. (For one thing, I’ve already had to move notes around a lot and connect them differently after putting them in, so in that way, Scapple is better than doing it by hand.)

Here is a screenshot of Scapple in use: 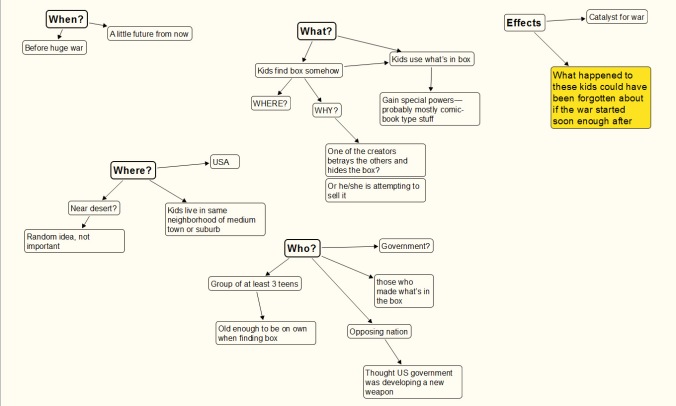 This is a slightly altered version of what I’ve been working on, with some things removed or changed to avoid spoilers.

How about you? Have you ever used Scapple before? Do you have other programs you use for organizing notes? Tools and tips are always helpful for writing in general, and NaNo in particular. Feel free to share your own.