This year has been a very productive one for me, fictionally speaking. I’ll recap some of the highlights.

I started this blog at the end of April in an attempt to keep myself from slacking off in my editing work. I’ve had some success with it, while at the same time let it slide now and then.

I participated in my 5th year of NaNoWriMo, and won with 107,234 words, passing the 50k word mark on the 12th. I was also more socially active than past NaNo years, even if most of that was online, and set a huge daily word count record for myself with 10,516 words on the 15th. It was a good year.

And here at the end of the year, I even had a very writerly Christmas. Here are the writing-related gifts I received this year: 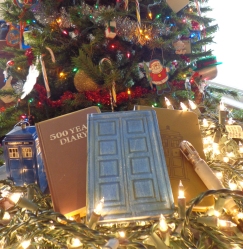 From my in-laws, a set of small notebooks, Doctor Who themed.

I have a larger version of the notebook on the right, but the one in the middle takes my focus. River Song’s spoiler-filled notebook is a great addition to my notebook collection. 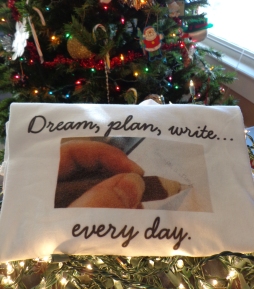 From my younger sister, a t-shirt with a reminder to never stop writing in some form or other.

I created this motto and image to go with it earlier this year, for use as a banner in some places. Then I went to Zazzle and slapped it all over several items and set them for sale. I hadn’t bought any yet myself, but hoped to one day. This is the t-shirt, which I did want more than the other items. 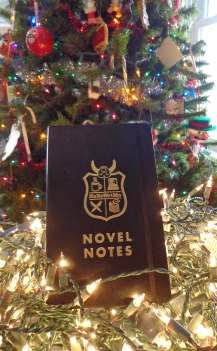 From my mom, a medium-sized, lined notebook with the NaNoWriMo logo on the front.

This blank notebook was a new product in their store recently, and I’ve wanted a blank notebook from them for years! I was one (among many, I’m sure) who suggested they create a blank notebook instead of the confusing (to me, at least) notebooks they already had that seemed to have filled pages and maybe blank ones, but who knows without buying them. I love the look with the shield in gold against the black. I have grand plans for this new addition to my notebook collection.

From my older sister, a mug she made herself.

The mug was brilliant. On the front is the motto I made up earlier this year to remind myself that every day should include some time for my creative pursuits, whether it be dreaming up new ideas, planning a story, or writing a story. The sister who made this is one of two who make up the Tri-County Sisterhood of the Traveling Book with me. That is what I call our little group that meets on Skype weekly to work on the editing of “Adventures in Pithea.” When I turned the mug to see the side and back, I laughed so hard.

Now this month, I have taken an initially unintentional break from my writing projects, which turned into a necessity as Christmas grew closer. Near the beginning of the month, my husband and I went out of town for 5 days, and the days before and after that were busy with preparation and recovery. Then wrapping, shopping, and other Christmas-related activities took up my evening time. Now as the season draws to a close and the new year is set to begin, I plan to delve back in with a fervor. I’ve done heavy revision on 1/4 of my first novel, so there is still a lot to go. Considering that that 1/4 took most of this year, it’s difficult not to get discouraged about how long it will be before it’s ready to attempt publishing. But I’ve not given up yet.

Just before this break started, I had begun a challenge to write/edit 500 words every day, and I am eager to get back to that. I’ve also dropped off on a plan to do one writing exercise from my Now Write! book per week, so I hope to have time for that again too. Those are my plans for this year. That and have as many mega meetings of the TCSTB as the others will allow.

To all of my fellow writers out there–whatever, whenever, and however often you write–what were your highlights for this year? What are your proud or disappointed moments from this year? And what are your plans for the coming year?