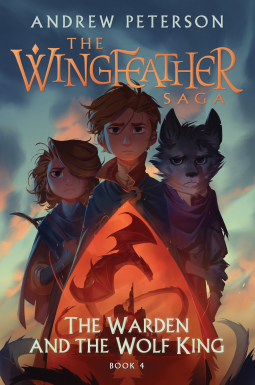 Spoiler notice: The following review will contain spoilers for the previous books in the series, which starts with On the Edge of the Dark Sea of Darkness.

War has come to the Green Hollows and surrounding lands. King Kalmar knows that fighting the overwhelming forces of Fangs won’t be enough, though, and is determined to confront Gnag the Nameless himself. The Wingfeathers hope for a better future and a return to their homeland, but what will it cost to get there?

Again I find myself wishing I could say more, but not wanting to have to post behind a spoiler tag. The conclusion to the saga was at least as amazing, if not more so, as the run to get here. For a series that started a bit slow (not boring, but slow), the ensuing adventure, peril, emotion, and character development was worth every bit of the build up.

The character development throughout the series, and especially this last book, was realistic and even made me examine my own heart more closely. Though I have to admit that I don’t think Leeli had much development overall. The ending was incredible, and I never saw it coming. It left me in shock, and with the biggest book hangover I’ve ever experienced. I am already looking forward to when I re-read this series (which will probably be in September when the second half of the re-released books come out, which my husband already pre-ordered for me).

Keeping in mind that that this series is middle grade fiction, I’m going to share a bit of a story:

I read the first 2 books earlier this year, as ARCs for the re-release that will include all new illustrations and footnotes (the books originally came out 10 years ago). I remember thinking that my then 9-year-old daughter might enjoy them, but she likes reading in theory more than in practice, tending to start books and not finish them.

When Andrew Peterson started reading the first book live online during the quarantine back in March, she started listening with me part way through (she was usually outside playing when he read, and she didn’t have enough interest initially to stay inside to listen). By the time he finished reading book 2, she was hooked. She sped on ahead of me and listened to the audio books for 3 & 4. She loved them so much, she was desperate for me to read the rest so she could talk about them with me. She then proceeded to go back and read the first 2 books and re-listen to the last 2 books a few times. All in the space of a few months, by a girl who only halfheartedly read before this.

So to sum up, while the series itself is incredible–inventive, adventurous, emotional, even beautiful–the best thing about these books is that it gave my daughter and me something to enjoy together and discuss. Though we have to do it in whispers, because our enjoyment has gotten my husband’s interest piqued, and we don’t want to spoil anything for him.

Though I’ve been saying all through the reviews for this that the book is not overtly Christian–and it’s not–there was a message in this book that I really appreciated. And I just have to say that I think it’s okay to be jealous about someone else being allowed to literally directly encounter God, and you’re not invited. I can’t recommend this book enough to readers of all ages, and particularly suggest that reading it along with your kids, or even out loud to your kids, might just provide hours, days, weeks of great bonding time.

Thank you so much to Netgalley and WaterBrook & Multnomah for providing me a copy of this book to review.
**Note: This book has been out since 2014, but a new hardcover edition will be released Sept 15, 2020, with a beautiful new cover and new illustrations inside.

Find out more about The Warden and the Wolf King