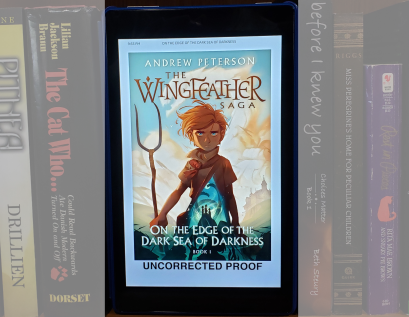 On the edge of the Dark Sea of Darkness live the Igiby family–12-year-old Janner and his younger brother Tink, little sister Leeli, and their mom and grandfather, known mostly as Podo. Their land has been conquered by Gnag the Nameless, who hails from Dang, across the sea, and who has sent his Fangs to keep the people in line. Through a series of connected events that all starts with a mischievous dog, the Igibys find themselves on the wrong side of the Fangs of Dang. When the Fangs come to realize that the Igibys have knowledge of the location to the jewels of the late King Wingfeather and the Shining Isle of Anniera, which are said to be the key to restoring Anniera and defating Gnag, the Igibys realize they will always be in danger.

This book was a lot of fun, with characters that are lively and entertaining and a lot of lore and history. The quirky nature of the narrative and even the names of various people and locations had me chuckling more than once. Though it’s children’s fiction, it doesn’t pull any punches, and reminds me of The Chronicles of Narnia, as well as Roald Dahl, to a degree.

Right off the bat, the explanation for the name of the world these characters inhabit gives you a sense of the author’s style. The first person to exist woke up on the first morning, looked at a rock, and said, “Well, here we are.” Thus, the world’s name came to be known as “Aerwiar.” Though none of the other names for people or places are really explained, and I did actually struggle a little muddling through so many when they came close together, this is a good example of the tone of this book.

Even with the whimsical nature, there is still some real peril. Fortunately, possibly because it’s meant for kids, for the most part, the good guys prevail and the bad guys are defeated, at least in some way. I’m not saying there aren’t some losses, but I won’t say more because of spoilers.

One of my favorite things about the book were the hints that the author dropped throughout the book, giving little nudges about a big secret revealed near the end. Two big secrets, really but they were tied together. While I suspected pretty early on, and then decided I was definitely right still a ways from the reveal, remember that this book is meant for kids. I could imagine kids near my daughter’s age, maybe a bit older, reading this and beginning to catch on, getting excited as they realized the truth.

It was fun and full of adventure, and I cannot wait to continue the series! I recommend this book for folks of all ages who enjoy clean, fun fantasy adventures. Also, you might see it labeled as Christian, and there are some references to a deity that many of the people believe in, but it is not overtly Christian. It may be a bit allegorical, again similar to the Narnia books.

Thank you to Netgalley and WaterBrook & Multnomah for providing me a copy of this book to review.
**Note: This book has been out since 2008, but a new hardcover edition will be released on March 10, 2020, with a beautiful new cover and new illustrations inside.