The Words: 4976 words written today. I went to the last write-in at my local library tonight. It was a small turnout, but I did get my normal day’s word count done while I was there. Then I went ahead and did one 1k30min with the Twitter feed, and wrote 1600 words during that.

The Story: Jonathan has been detained for the murder of his apprentice. He and Missy are discussing some concerning issues, like what on earth is going on in general, and why Jonathan’s wife Larxis said that he has a temper and that she thinks Missy is in love with Jonathan. He just keeps telling her to trust the justice system, and not to worry over things she can’t control. He wants her to cooperate fully with the investigation, and he’s certain the truth will come out (whatever that even is). I never knew he was so level-headed and trusting. Even I’m starting to wonder if he’s having a mental break-down. 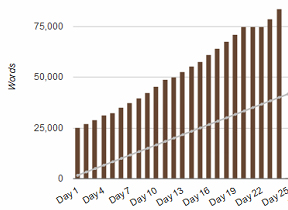 Don’t forget to check out today’s NaNoToons if you haven’t already: 2015 – November 24th

And episode 4 of the NaNoMusical! Rick falls down, and there’s a sappy love song!